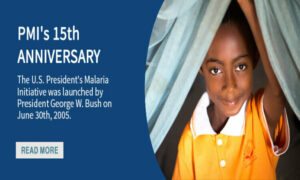 LUSAKA – In 2005, the U.S. government began the U.S. President’s Malaria Initiative (PMI) to save lives and give children the gift of a healthy childhood in places where malaria hits hardest.  Over the last 15 years, the American people, through PMI, have helped save more than seven million lives and prevented more than a billion malaria infections in 24 partner countries in sub-Saharan Africa, including Zambia, and three programs in Southeast Asia.  These countries represent about 90 percent of the global malaria burden.

Since 2007, PMI-Zambia, in collaboration with the Ministry of Health and the National Malaria Elimination Center (NMEC), has invested over K5.37 billon ($300 million) to combat malaria.  Most recently, U.S. government-supported anti-malaria programs in Zambia have focused on the five provinces with the highest burden of malaria: Copperbelt, Eastern, Luapula, Muchinga, and Northern. PMI-Zambia’s investment strategy focuses on promoting a package of high-quality, evidence-based malaria control interventions.  These include the provision of insecticide-treated bed nets, indoor residual spraying, prevention of malaria during pregnancy, and improved case management through prompt diagnosis and treatment.

“It is the vital work of community health workers and partnerships like the one between the United States and Zambia that have allowed for the dramatic reductions in malaria-related deaths,” said U.S. Chargé d’Affaires David Young.  “We are honored to partner with the Zambian government and our local partners to strengthen the use of data for decision-making, invest in malaria treatment and other commodities, and support the mass distribution of insecticide-treated bed nets.”

In partnership with NMEC, PMI has helped to ensure that 80 percent of households own at least one bed net, 77 percent of children in rural areas sleep under a net, and 81 percent of pregnant women receive medications to prevent malaria.  As a result, since 2010, Zambia has seen a 37 percent decrease in child deaths from malaria nationwide, and an overall decrease in malaria deaths in PMI-focus provinces of 76 percent.