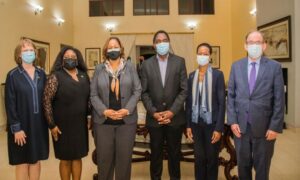 In addition to attending President Hichilema’s inauguration, the delegation attended an event to celebrate Zambia’s strong democratic ideals and recognize the efforts of Zambia’s heroes of democracy, who contributed to the recent peaceful transfer of power.  To further economic ties and generate prosperity for both countries, the delegation met with representatives of the Zambian and American business communities and visited Standard Microgrid, a U.S.-based company which serves over 130,000 Zambians who previously did not have access to reliable or affordable electricity.

During meetings with President Hichilema and his advisors, the delegation underscored the deep partnership between the United States and Zambia, reaffirming efforts to work together to build on the excellent bilateral relationship.