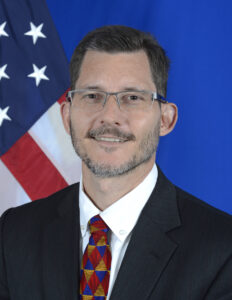 Mike Gonzales was sworn in as the U.S. Ambassador to the Republic of Zambia in August 2022.  He previously served as the Deputy Assistant Secretary of State for West Africa and African Regional Peace and Security and as the acting U.S. Special Envoy for the Sahel Region.

A career member of the Senior Foreign Service with the rank of Minister-Counselor, Mike’s previous senior positions include service as the Director for Analysis of Africa in the State Department’s Bureau of Intelligence and Research and as Deputy Chief of Mission and Chargé d’Affaires, a.i., at the U.S. Embassies in Kathmandu, Nepal and Lilongwe, Malawi.

Throughout his career, Mike has built partnerships with host governments, international partners, and civil society organizations to promote good governance, open political space, improve business environments, protect human rights, and expand economic opportunity.  His previous assignments include service as the Counselor for Political and Economic Affairs at U.S. Embassies in Zimbabwe and Ethiopia; the Horn of Africa Unit Chief in the Office of East African Affairs; Deputy Public Affairs Officer in Kampala, Uganda; Information Officer and Embassy Spokesman in Addis Ababa, Ethiopia; and Environment, Science, and Technology Officer in Dhaka, Bangladesh.  Prior to joining the Foreign Service, Mike was an economic analyst in the Antitrust Division of the U.S. Department of Justice.

In 2009, the American Foreign Service Association awarded Mike the William R. Rivkin Award for Constructive Dissent.  He is a five-time recipient of the Department of State’s Superior Honor Award and the 2011 runner-up for the James Clement Dunn Award for Excellence.  He is married to a USAID foreign service officer, with whom he has two children.  Mike received a Master of Arts degree in international development from American University and a Bachelor of Arts degree in Diplomacy and World Affairs from Occidental College.  He has studied Spanish, French, Italian, and Bengali.