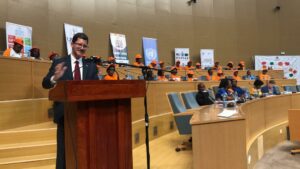 As prepared for delivery

The Honorable Brenda Tambatamba, the Minister of Labor and Social Security

Distinguished representatives of the Government of the Republic of Zambia

On behalf of the U.S. government, I am honored to be a part of this important gathering to mark the International Day for the Elimination of Violence Against Women and Girls and the start of the 16 Days of Activism Against Gender-Based Violence.  Sexual- and gender-based violence affects people all over the world, regardless of age, economic status, or nation, and it must be stopped, not just today, but every day of the year.

We know that women and girls are the most affected by gender-based violence worldwide, including both in the United States and in Zambia.  The data are astonishing: an estimated one-in-every-three women will experience physical or sexual violence in her lifetime.  These are not just nameless women and this is not just a statistic.  We are talking about our mothers, our sisters, our daughters.  And, even more insidious is that such violence often occurs at the hands of an intimate partner—a husband, friend, boyfriend, or neighbor.  Let that sink in for a moment.

This year’s theme, “Are you safe?” encourages all of us to think about others – our friends, colleagues, neighbors, those we serve through our work or in our daily activities – and ask if they are safe and have access to the support they need to stay that way.  All people have the right to be safe from violence, be it sexual, physical, or otherwise.

Preventing and responding to all forms of sexual- and gender-based violence is a cornerstone of the U.S. government’s commitment to promoting democracy, advancing human rights, and furthering gender equity and equality.  Sexual- and gender-based violence a form of human rights abuse, discrimination, and a manifestation of perceptions of unequal power based on gender or perpetrated sexually.  It occurs in every country and at every level of society, with direct and indirect costs to individuals, families, communities, and economies.

Members of some populations face overlapping forms of discrimination that put them at even higher risk of gender-based violence—including people with disabilities; older people and widows; children and young people; LGBTQI+ people; migrants, refugees, and internally displaced peoples.  We must take care to ensure that our efforts to prevent and respond to gender-based violence reach not only “average” people, but also specifically reach these people who are particularly affected.

In Zambia, the number of sexual- and gender-based violence cases more than doubled over the past year with nearly 9,000 cases reported between July and Sept 2022, compared to only 4,000 over the same period of 2021.  Of those cases, the overwhelming majority – more than 75 percent of the victims – were women and girls.

Despite this clear pattern, I am concerned by the perpetuation of a harmful and false narrative that I have seen running rampant since I arrived here in Zambia.  I am talking about a proliferation of reports of sexual assault against boys and men making front-page news, and blaming it on homosexuals.  I am troubled by this narrative because it hides and distracts attention from the reality, from the real problem.  To be clear, sexual assault against boys or men is deplorable, should be condemned, and must be prosecuted.  Not because the victims were male, but because the crime of sexual assault occurred.  I am alarmed by this narrative because it devalues the girls and women – who are by far the overwhelming population of sexual assault victims – by saying effectively that the sexual assault they experienced is less of an offence, is less severe, is less of an assault than that perpetuated against boys.

But, I am also concerned by the false narrative that equates homosexuality with sexual assault because it is a false characterization of the reality.  The two are distinct; by definition sexual assault is not a consensual relationship.  And, if our goal is to end sexual assault, mis-diagnosing the problem will lead us to a wrong prescription for the remedy.  The reality is that the overwhelming majority of sexual assault is perpetrated by men.  But broadly targeting men will not end sexual assault.  Of course not!  That remedy would criminalize the vast majority of men who are not sexual offenders.  To prevent and end sexual- and gender-based violence – regardless of the gender of the victim – we must correctly identify the assailants and we must hold them accountable for their actions, and not falsely pursue others based on irrelevant characteristics.  The targeting of homosexuals – much like broadly targeting men – unduly criminalizes and stigmatizes our neighbors and brothers while notably distracting efforts away from the meaningful pursuit of those individuals engaging in sexual- and gender-based violence.

The United States stands ready to support genuine efforts to prevent and respond to all forms of sexual- and gender-based violence.  Since 2005, we have partnered with the Zambian government to increase support for gender equality.  Together, we have helped strengthen gender-based violence response services to address violence against people of all genders.  Together, we have helped improve and implement laws and policies that protect survivors and enforce consequences for perpetrators.

Some of these efforts include support to the Stop Gender-Based Violence project, training of health care workers in effective ways to respond to gender-based violence disclosure, and life changing parenting programs. These interventions sensitize and empower communities with the skills and resources to prevent and consequently end gender-based violence and violence against women and girls.  Over the last year, 25,000 survivors – mostly women and girls – have been treated for trauma through One Stop Centers in eight provinces.

Furthermore, to stop violence before it starts, more than 170,000 adolescent boys are benefiting from the “Coaching Boys Into Men” program, and over 24,600 Adolescent Girls and Young Women (AGYW) and their care givers received violence prevention support through our DREAMS parenting program.  Coaching Boys into Men trains athletic coaches to teach young male athletes about pursuing and building healthy relationships while the parenting program helps in creating a conducive family environment for violence prevention.  I am delighted to share that, in collaboration with the Ministry of Youth, Sport and Arts, this successful approach has been integrated into the national sports curriculum.

In the coming year, the U.S. government will continue to intensify efforts to respond to and prevent sexual- and gender-based violence.  In addition to updating and measuring success against our U.S. Strategy to Prevent and Respond to Gender-Based Violence Globally, we will release the first-ever domestic U.S. National Action Plan to End Gender-Based Violence.  This strategy will allow us to take concrete steps to ensure an end to sexual- and gender-based violence in the United States along with our global efforts.  Because, let me be clear here, the United States, the U.S. Embassy, and I am not here saying “Zambia has a GBV problem and needs help,” but rather the world – including the United States – has a sexual- and gender-based violence problem and we each much help one another toward its eradication.

We will support communities to use and implement evidence-based activities to prevent violence against women and girls. We will continue to teach young people about resiliency, prevention, and healthy relationships.  We will support faith and traditional leaders to change social norms around sexual- and gender-based violence. The U.S. government will address the social and structural barriers, including gender inequality and gender-based violence, that impact access to and uptake of HIV services for all Zambians, including adolescents and young people. Through the delivery of person-centered services grounded in a human rights approach, we will support the Government of the Republic of Zambia in achieving equity in HIV and health outcomes for all Zambians, regardless of gender, age, or sexual practices.

During the 16 Days Campaign and throughout the year, I appeal to all of you to familiarize yourself with the resources available to those who are experiencing gender-based violence, and to share those resources with others.  To check in with those around you and make sure that they know they are not alone and can seek help, and where to get that help, whether it’s at a One Stop Center, a DREAMS Center, or toll-free help lines like Lifeline 933 and Childline 116.  Ask them, “Are you safe?”

We should all be passionately fighting to end this violence and not only during the next 16 days, but every single day of the year.  As we work together to end gender-based violence and violence against women and girls, I appeal to the Zambian government – and specifically to the recently-established Gender Division – to actualize the Anti-GBV fund.  This fund supports survivors to seek justice and hold perpetrators accountable.  We also urge the Government to ensure that One Stop Centers are integrated into all health facilities to ensure survivors of violence receive comprehensive post-violence services.

Honorable Minister, distinguished guests – thank you again for the opportunity to speak at this important event.  It is an honor to join you in stopping sexual- and gender-based violence and violence against women and girls in Zambia.